After a nail biting queue online, I managed to procure tickets to visit the Art sensation that is Dismaland, put on by Banksy in Weston-Super-Mare.  This exhibition was not only his own work, but he curated many other global contemporary artists for the show. 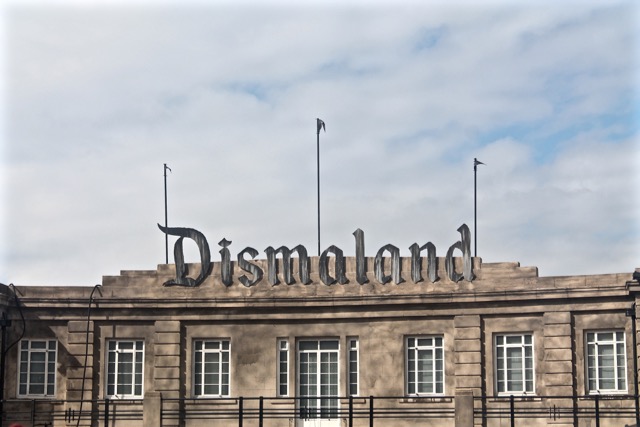 I love Banksy; he is irreverant, political and a perfect commentator on society today using what I see as bleak humour and wit to get his point across.  Plus he is also a local boy and keeps his main exhibitions in this area of the UK, so it was not a long way to go, (thanks v. much Banksy, as there were people there today that I spotted from European countries who had come all the way just to see the exhibition).

I remember Weston-Super-Mare as a particularly grim place where I was sometimes forced to hang out as a young teenager, the sea there is always brown as it is on the Severn Estuary, and there is that desolate English seaside town vibe going on.  The actual location for the show used to be a large lido which was called the Tropicana in the 80’s, and it was a welcome respite at the time from the turgid brown sea waters that no-one wanted to enter.  Now it is a desolate empty site, just perfect for the location of Dismaland.

The start of the show is an experience in itself.  Staff have been hired to make this a memorable exercise in dismalness and are encouraged to be as negative as possible. You start with a security check like in an airport, with cardboard props as scanners etc on the staff.  So on entering behind a crying baby I heard the security check man say  ‘That is the ugliest baby I have ever seen’ to the mother.  However, she was game and told him he was no pretty picture himself. I got told off for having too clean shoes, and my accompanying friend was told to stop smiling at once.  Once you get your head around this, as it is part of the whole Dismaland experience, then you will appreciate the event even more.  I got quite good at being pretty dismal back to the staff throughout my visit, it felt only polite to reciprocate in kind! 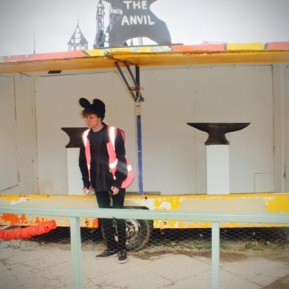 Entering the site, it is a vista of grimness withing a walled site.  A burnt out castle (very much like the Disney castle hence the reference) rose from the remains of the Tropicana pool, crashed cars lay about, a rotating caravan gently rolled, graffitti art adorned the walls, with tatty fairground rides and games that encouraged all to join in.  Even the is floor is cracked concrete and uneven and walls made up of metal sheets and concrete, and we had a perfect grey day to view it on.  All was dismal, all was good. 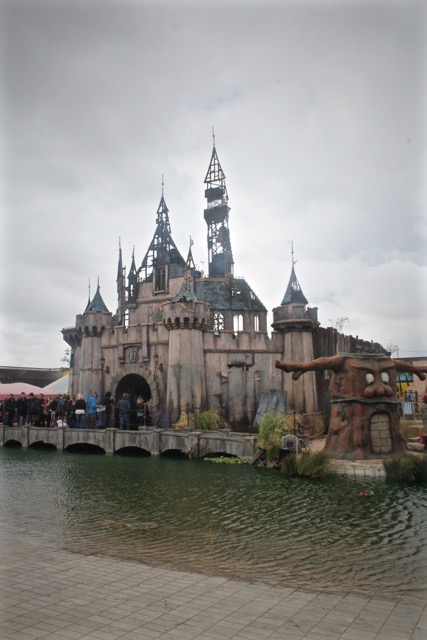 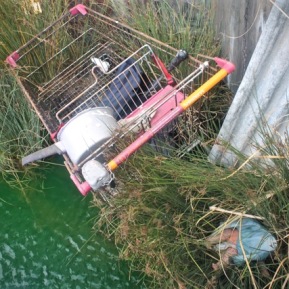 To one side are some serious galleries erected in what look like ramshackle train siding sheds, although the lighting inside was done really well.  In these galleries are some inspirational art to view; we had Jenny Holzer’s iconographic quotes flashing at us in blackness, the Grim Reaper drove around on a bumper car to groovy disco, and a multitude of brilliant paintings and sculptures amused, shocked and capitvated the audience. 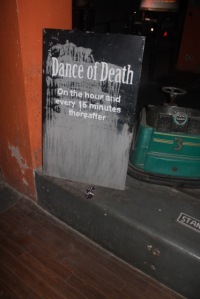 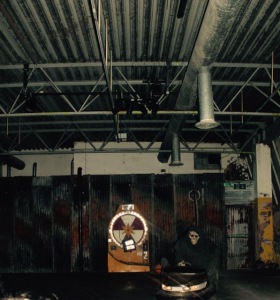 I cannot begin to pick a favourite as the artists are so different in style and tone and from all over the world.  There were a lot that I had not come across before as well as some old favourites. 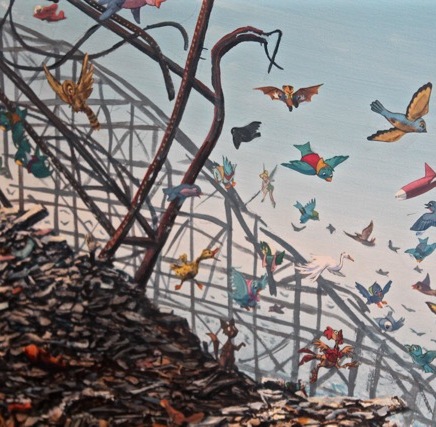 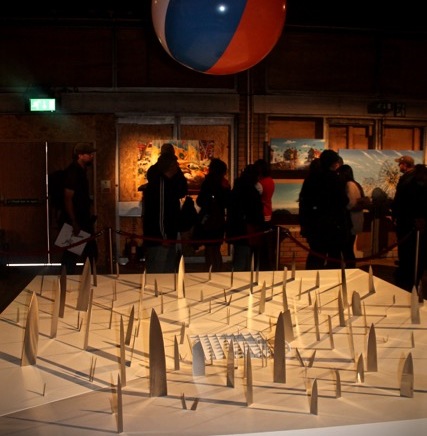 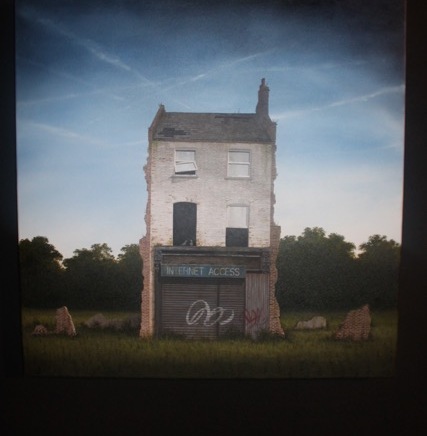 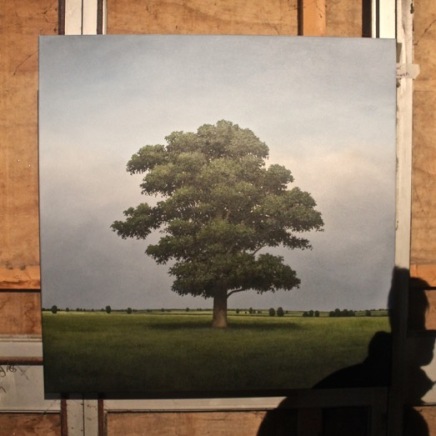 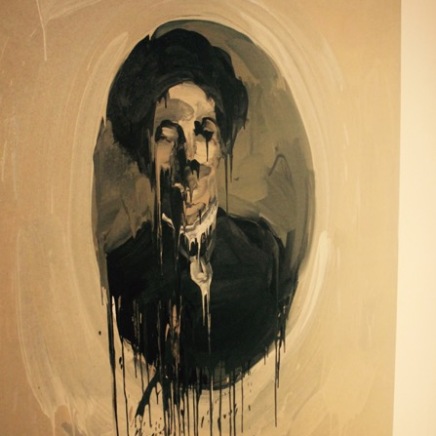 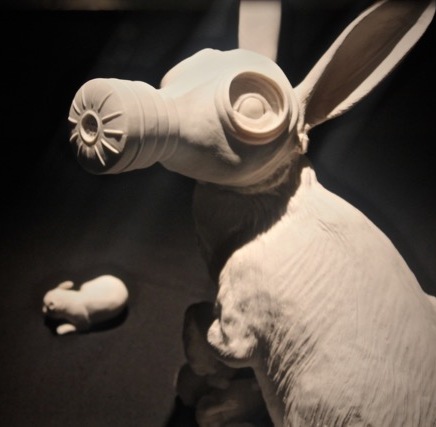 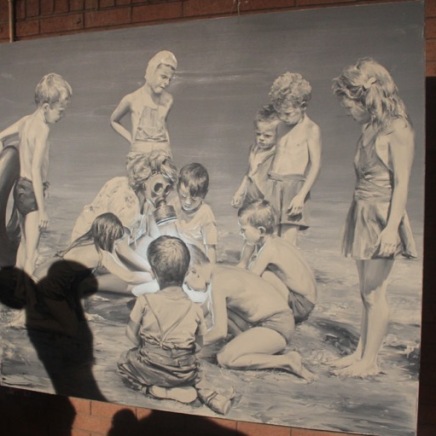 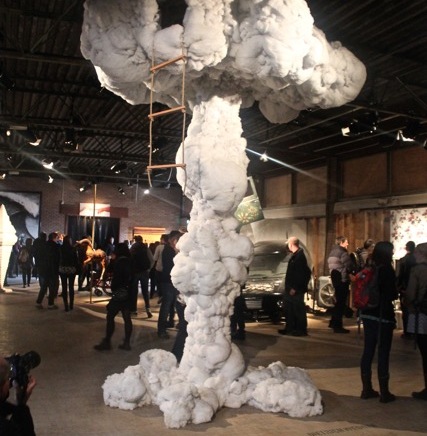 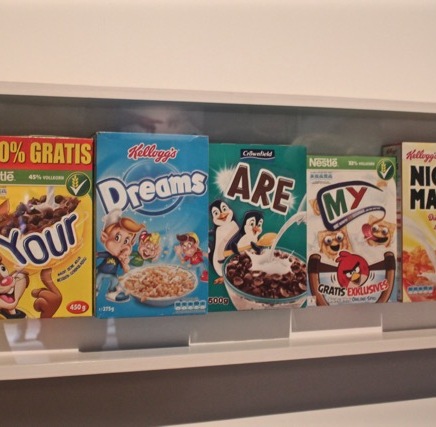 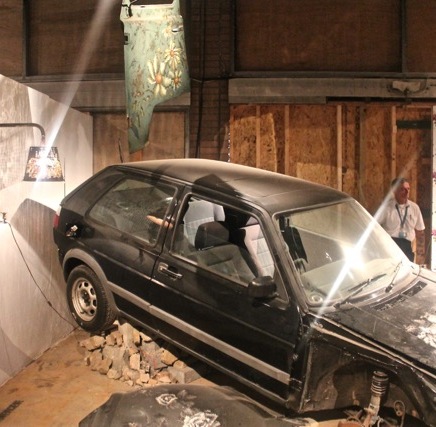 There is one room where Jimmy Cauty from the band KLF, (remember him, he was the man who burnt a million pounds in front of the press a couple of decades back?  I personally thought he was a bit of a nutter then to be honest).  For Dismaland he has made the most amazing scene of an entire mini model town set in Bedfordshire, swarming with police and flashing lights.  It was like the aftermath of a riot, but there were no civilians to be seen.  It was amazing, all set a eye level, and my pictures don’t do it justice as there was so much to look at.  I reverse my opinion of Mr Cauty. 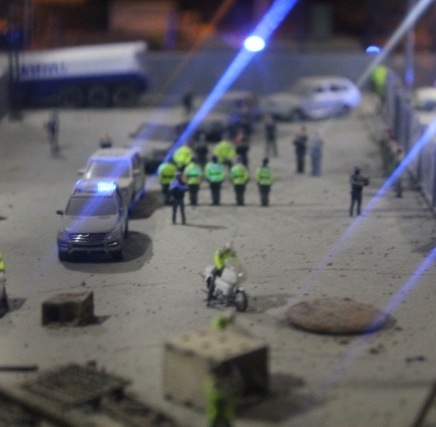 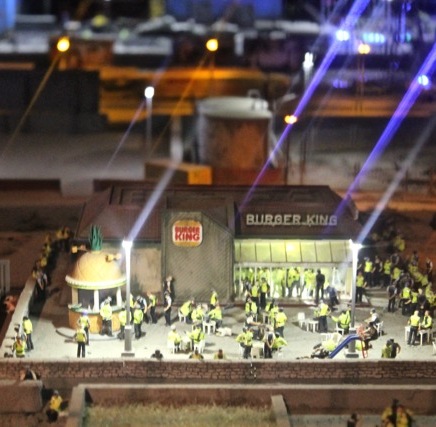 Inside the main castle is the fabulous Cinderella pumpkin crash piece.  On the way in we were snarled at by a member of staff to stay to the left if we wanted a photo opportunity.  We complied and were asked to smile at a smiley face point on the wall while a picture was taken.  We then wandered into a scene of devastation, really reminiscent of Princess Diana’s death, with what seemed like larger than life models of paparazzi swarming around a dying princess.  But this was not Diana, it was Cinderella, with her little bluebirds flying above her and still pulling up her ribbons, as if trying to get her back to life.  The only lighting was the strobing of the paparazzi cameras.  As we left we were asked if we wanted to purchase our photo, just like you do at theme parks on roller coaster rides.  But this time we had been inserted into a photo of the crash scene grinning happily at the disaster in front of us… dark yes, but genius. 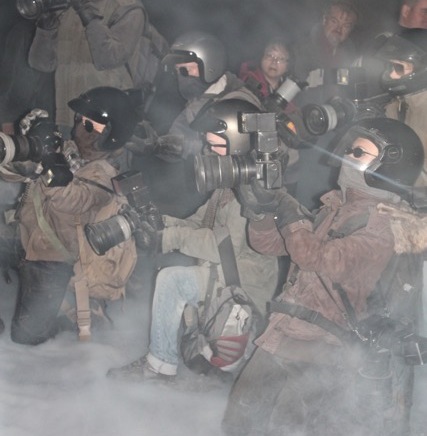 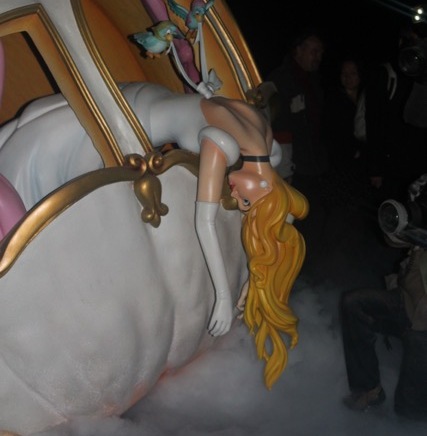 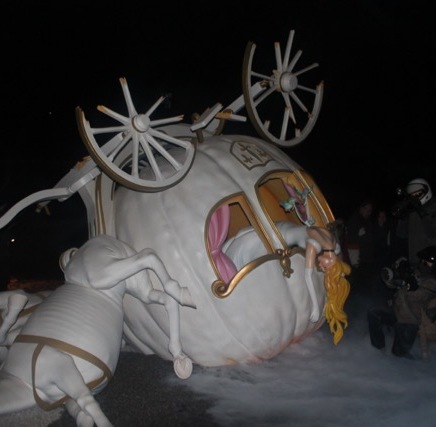 On an old fashioned carousel people happily road the horses, and I only realised that this chap was inserted into the ride after a fair while.  A fair reflection on the scandal of horse meat sold as beef.  Fancy a little cheveaux in your ready meal? 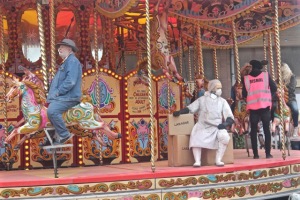 There was Mini Gulf, (crazy golf based around the oil crisis), 360 degree rolls in the astronauts caravan, STRIKE! magazine, the Museum of Cruel Objects, and fantastic banners and posters for demonstrations ranging from the very serious to the inane: 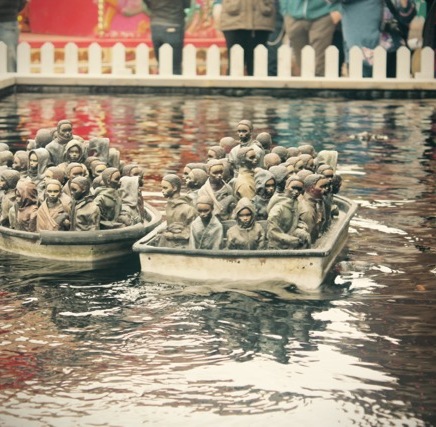 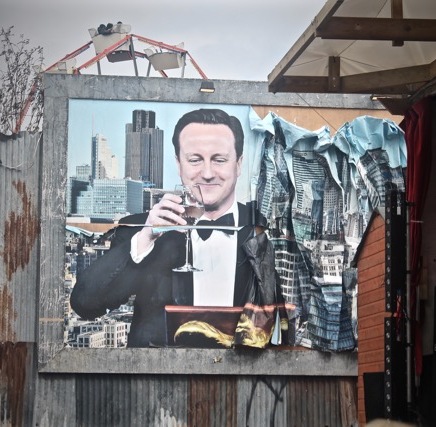 Everywhere I looked there was something new to see… 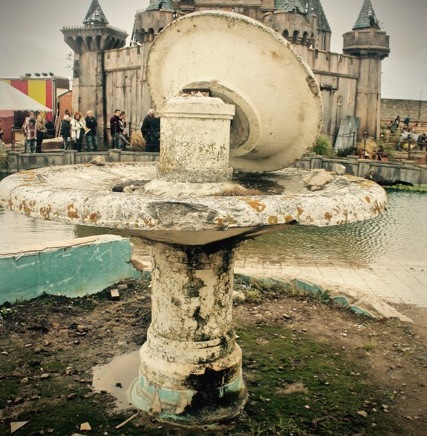 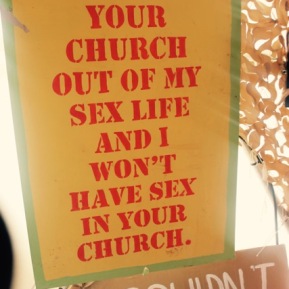 I could not pick a favourite piece as I loved pretty much everything, but I did see some new artists works that I loved, these two pieces in particular by the Israeli artist Neta Harari Navon, which capture chaos and are beautifully painted: 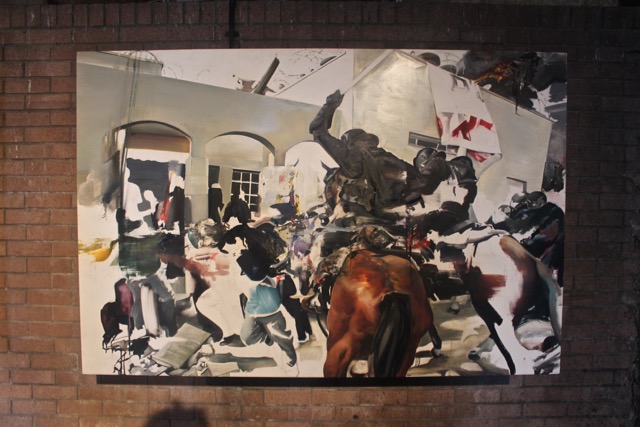 I also saw pieces by Fares Cachoux from Suria, which are simple and really effective graphics. I was not aware of his work before, and love his style and content.

When we finally left Dismaland we were very over stimulated, very happy and yet also feeling a bit dismal about the state of this world.  Hopefully this was the intent of the experience.  On the way out we bought a program from a moody seller.  He signed it for us, probably making it into a new piece of art in itself for all I know, so thank you to the begrudging Kurtis for that. …