I have had my first near-miss experience of a totally revolting con via internet selling this week.  I am sharing with you, as a) cannot believe I was targeted and am loudly indignant, and b) apparently this is a well-used scam and a lot of people fall for it.  So beware if anyone does the same to you….

I needed to make room in my hallway as the Armoire that I did for a makeover is getting in the way.  I need to shift it, preferably with someone else having to move the thing…  So rather than ebay which is the usual mode of selling, I joined Gumtree as I can fix the price and it seems to work well for items.  I have bought before from it with no problems.  Here is the Armoire in question, which I put on for a very reasonable price as I need it out asap.

I listed it, set the price and literally within 10 minutes I had a text from someone called ‘Gumtree Ad’.  A lady called Mary wanted to buy it on behalf of her cousin.  She agreed the price, and then started emailing me.  During the course of the emails it transpired she was ill after heart surgery,  and was having to send a courier to get the Armoire.  I thought it odd that she was running around after someone else for a wardrobe after having massive surgery, but she agreed to pay via paypal and it all seemed legitimate.

To double check as the niggling doubts had set in, I investigated online scams via the web.  One scam that seemed common was that people seemed to have overpaid, and then asked for a refund, and somewhere along the line the money vanishes along with the buyer.  ‘Not me’, I thought, I am protected by Paypal after all.

I then get an email form Mary, telling me she has paid via paypal and to look out for the email confirmation.  The email popped into my box, with a message that read..

Hmm, I thought, and then this came in from Paypal (in two parts here as I couldn’t work out how to make it one long thin jpeg!) 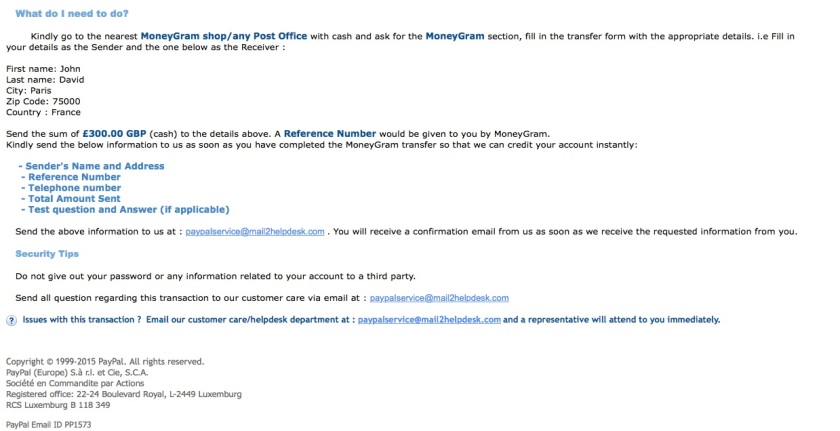 Suddenly it was all looking very suspect.  I did nothing with the above email, checked my real Paypal by logging on separately, and nothing was there.  This was all a hoax, just like the ones I had read about, and I am sure that if I clicked onto that email I would have been taken to a bogus paypal site, and then given money away to a random stranger.

I was REALLY annoyed.  I can imagine that a lot of people fall for this, to end up out of pocket and still owning the item they were trying to innocently sell.  So I sat and thought for a bit, in case I responded to Mary in a rage which served no purpose.  But then this popped in, chasing me for the money before I had a chance to compose an answer…

It was… the…final… straw. My response.

And in the meantime I reported her to Paypal/Gumtree/ Fraud department Police and Moneygram. It is a real shame that people are out there like ‘Mary’, as it is hardly highbrow selling on Gumtree and similar sites, and it creates a very bitter taste in ones mouth.  I like to have faith in people.

Funnily enough I have not heard anything from Mary since, but a nice lady is buying the Armoire now, (with cash and a van to take it away to a more local home).  So now I have a space to fill, which is always an exciting new adventure….

Finished Poppy.. 🙌
Flower 🌸
Exterior flooring goals
Original cob wall left exposed in a renovation project at Heligan
Last rose of the summer peeping its head up in my garden 🌹crazy colour blocking and striation going on in these petals .. all natures doing of course🙌
Love this paper❤️❤️ @grahamandbrown #imperialwallpaper #wallpaper #wallpaperinspo #oriental
Liking this seafront wide snaking step arrangement, goes on for ages around the bay making a great seating area #steps #stairs #outdoorseating
Got to love a drone😍 here's is an overhead shot from recent filming of the Poppy we did.. not graded etc, but definitely shows the scale
Loving this @worldofinteriors_uk cover.. 😍👏 reminds me of my house and my husbands interesting offerings to the decor 😂. A design classic