Roll over Downton Abbey (aka Highclere)… today I visited Dyrham Park near Bath which is in the middle of a huge roof overhaul, and a rarity in that the National Trust lets the visitors see the conservation work which goes on in one of their properties.

The house is set in 274 acres (1.1 km²) of gardens and parkland. The west front of 1692 was commissioned from the Huguenot architect, Samuel Hauduroy, and the east front of 1704 from William Talman, architect of Chatsworth, by William Blathwayt, who was Secretary at War to William III.

Because of Blathwayt’s royal connections, and his influential uncle, Thomas Povey, Dyrham became a showcase of Dutch decorative arts. The collection includes delftware, paintings and furniture. 18th century additions include furniture by Gillow and Linnell.  The interiors have remained little altered since decorated by Blathwayt. The Blathwayt family lived at the house until 1956, when the government acquired it. The National Trust acquired it in 1961.

The overall design of the first ornate gardens is thought to have been by George London, these gardens then went to ruin and were redesigned into parkland as was the fashion in 1790 by Charles Harcourt Masters, a Bath architect and surveyor.

The interiors are laid out very formally, with connecting principal rooms and dramatic staircases made from exotic woods shipped in from Virginia and the Carolinas.  On this visit, half of the house was formally open, and the other half being used a storage whilst the renovations are carried out, but still accessible for tours.

The house is currently undergoing a huge roof overhaul and the whole building has been covered in scaffold for a year.  The National Trust have made it up to visitors who cannot see the facades or some principal rooms laid out as usual, by letting us get right up onto the roof!  They have erected lifts and a huge walkway around the perimeter of the building.

We were allowed to go up onto the roof to look down and see the building team hard at work replacing lead, slates and stonework restoration.  It was amazing to be able to see a house from above, and luckily the polythene which wrapped the scaffolding hid the height that we were at or I may have got intense vertigo and had a fainting fit.  Realistically, after this work the roof should hold for another 400 years and not be accessible as it is now, so it was a privilege to be able to do this, albeit an unusual one! 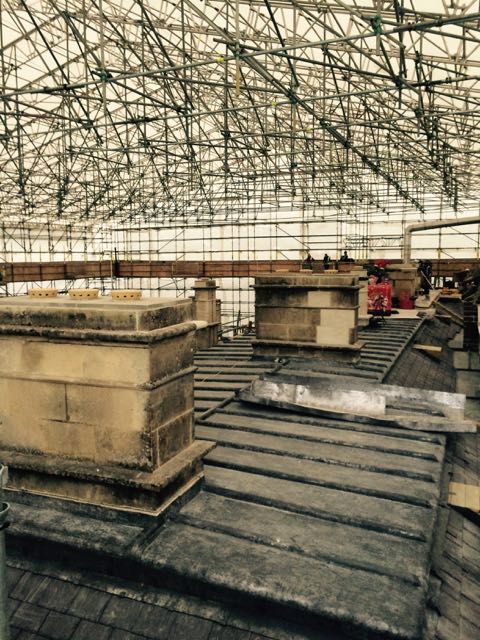 I really recommend this as a day out before the scaffold comes down.

Answer: the rear painting is the original which was sold to pay off debts.  The front one is a copy and had a frame made very ornately to make it look more important that it actually is.  The family managed to buy back the original some time later so now have both of the paintings under one roof.

Pattern in watercolour and pens taken from the reflections of my site in the surrounding water, swipe to see process #fmp #uweinteriordesign #siteinspiration #siteinspo #designinspo #designdetails #designer #mydesigns #designideas
Looking at various veneers from indigenous trees in relation to my site ... and the beauty of the grain is second to-none .. did you know that wood grown in the Uk sustainably still has to be shipped to Europe for cutting and then be sent back ? How does that help the carbon footprint ?🤔.
Sketch model .. FMP .. 3D interpretation of global tea shipping routes in the 19th century... 🫖
Interior dining room suggestions in covid times 😬 this space was obviously being underused, so a slab of mdf and a ping pong net have transformed it... bingo!!! Plus the ping pong balls don’t damage the chandelier if they smash into it 😊.
Concept collages for FMP - designing a new Contemporary Art Gallery which may or may not include an extension which bridges water.. tbc 😬
Sketchy sketchy.... site analysis... #siteanalysis #drawing #interiordesigninspo #site #siteinspire #arnolfini #uweinteriordesign
Model making for latest project.. site exterior .. I find model making very therapeutic, and it helps me constantly reference the site clearly😊. Innards coming later....
Materials for a sustainable house- reusing materials to create a house that fits the future
Shadows #lightplay #shadiws #pattern #light #look