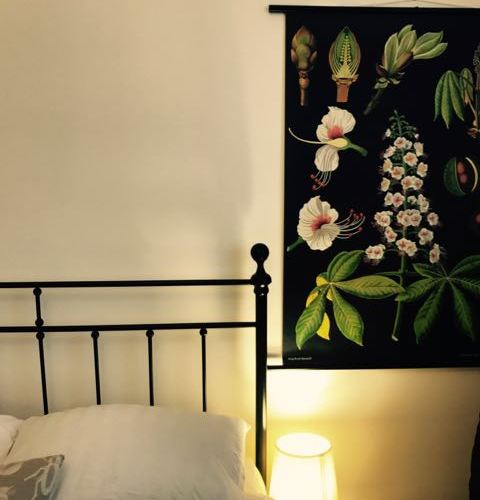 My youngest has always had one of the smallest bedrooms in our house. I think that is generally what younger children get actually in the pecking order of families!  Poor them… they are definitely overlooked a lot…. she also always got hand me down clothes for years, but I did always get her new undies and socks!

Our eldest has now moved out to go to Uni, and will only be back home for holidays, so we thought it time to do some switching around of bedrooms.  We have 5, so are a bit spoilt for choice, but the youngest had always had what could be called a very small double.  She is also VERY messy, so it was a question of bribery… ‘if you tidy your your room and keep it up for a while, you can move into a larger room…” It worked, and she made an effort, so I had to honour my word.

This then escalated and became a massive upheaval over Christmas, it actually always sort of escalates when I start fiddling around… I also had a pretty weeny budget and needed to be able to re-use and re-purpose existing items if possible.  An existing spare room, (which had been decorated for my mum mainly when she stays over in a very granny-friendly style), was to become my youngest daughter’s room as it was much larger.    And as such, it was not teenage friendly in terms of style.  Here it is as it was… see what I mean…?! 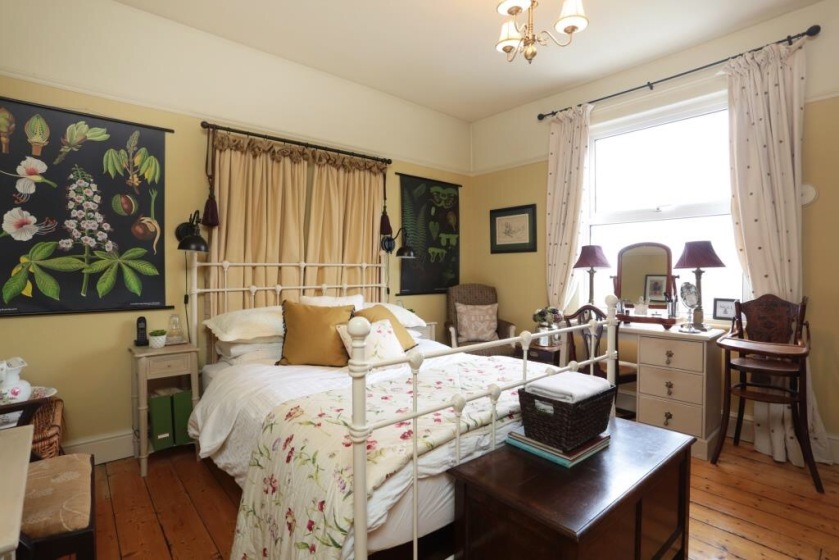 And my daughter’s existing room was then meant to switch back over into being a spare room again.. this is the other room when my daughter was in it: 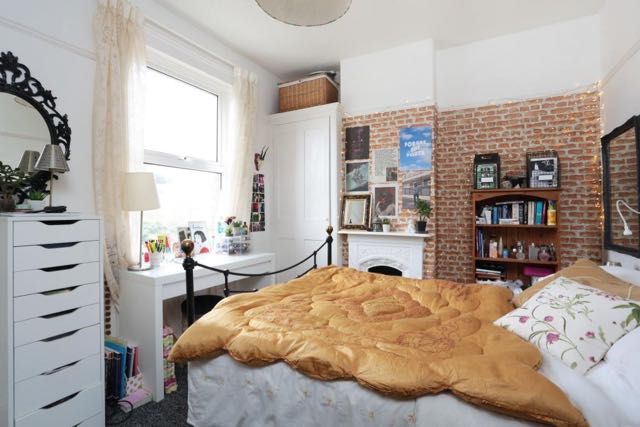 Crammed, no decent storage and hideous fake brick wallpaper which I reluctantly agreed to a couple of years ago as I was in no mood to chip off all the plaster for real.  So definitely time for a change.

I was shown pinterest boards with the most white, zen and minimalist interiors of dream bedrooms.  ‘Wow’, I said, ‘NICE!’…   But was I was really thinking was…’Yes, of course  – it’s not like you don’t have loads of STUFF… and that STUFF does not stay in the allocated places usually.. and the STUFF is added too with lots of my china filled with various stages of decaying MOULD”…

But I agreed as she had tried to be clean, and then spent 2 days bent at odd angles totally whitening out the room.  I forgot how much I hate rolling paint onto ceilings.  3 coats later, we had pure white.  The floor is already lovely old pine stripped boats, and there is a pretty original fireplace and victorian sink. 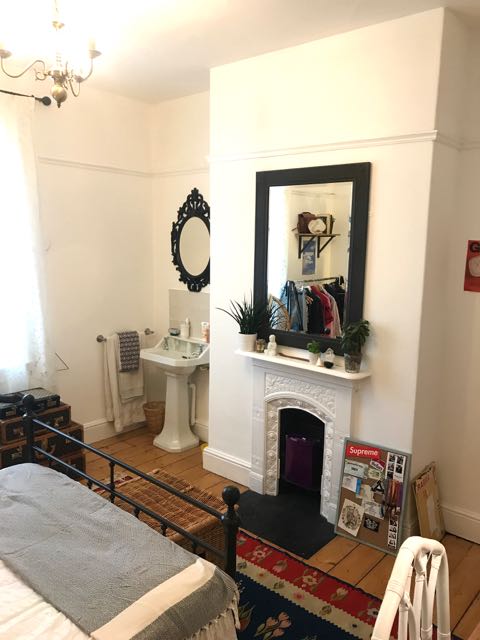 We got her a new bed and mattress, and then I hunted through the house and found an oak desk, a beautiful needlepoint rug that I forgot I had and has been in the attic for years, cut work white curtains and a freestanding clothes rail (she wanted that sort of look, forget the dust!).  The mirror was originally taupe, and it got a quick coat of Annie Sloane’s Graphite for an update. 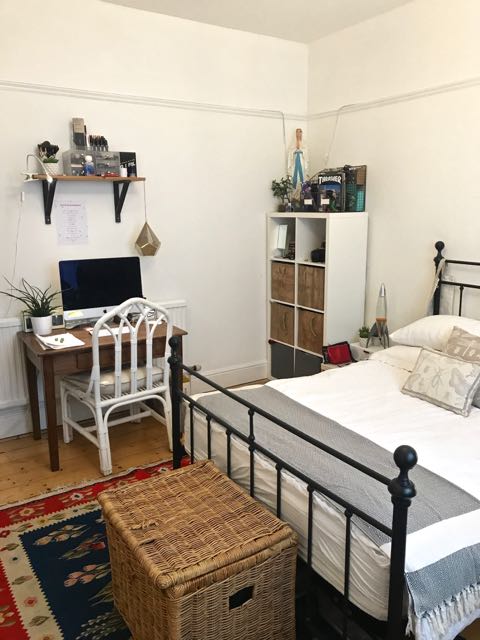 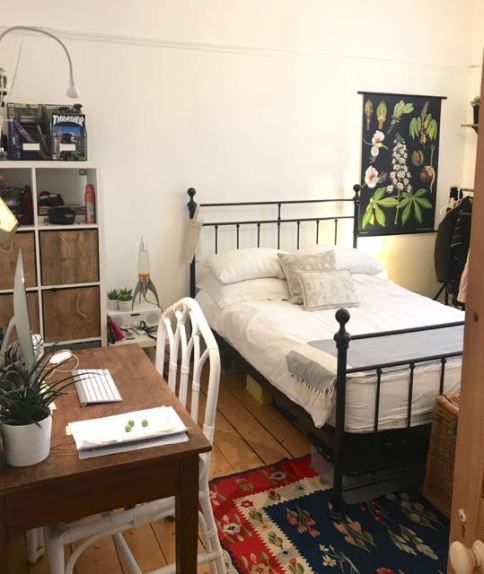 She also nabbed all our Louis Vuitton luggage that came from a late Granny and has been scattered around the house for years as storage boxes.  Teenagers seem obsessed with designer brands, so this was manna for her.  I picked up a 70’s peacock chair from the local charity furniture shop for a bargain £20 which she was slathering over, and made her some shelves from bits and bobs of wood I found in the shed. 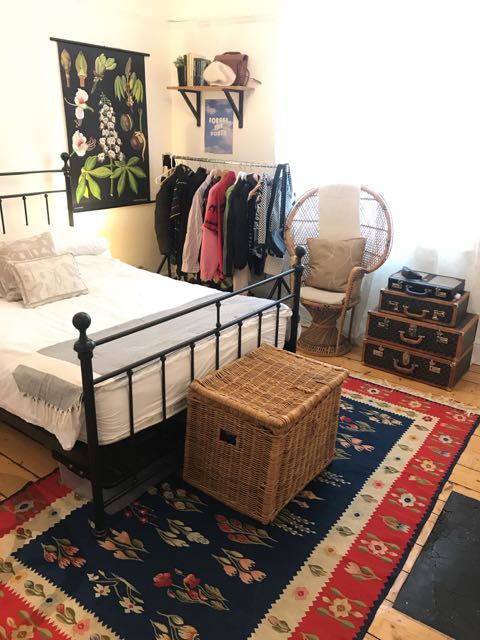 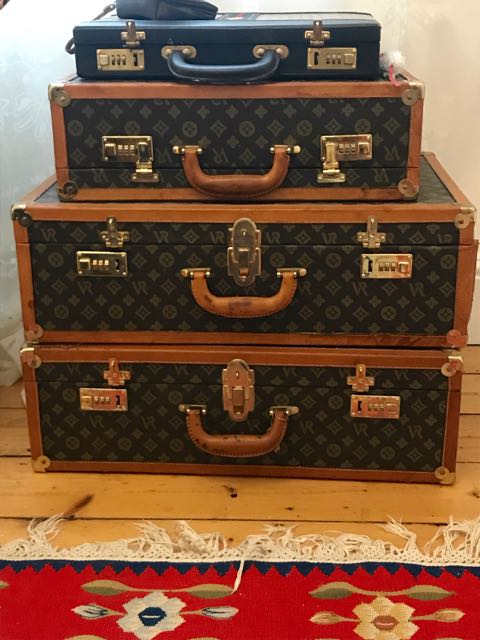 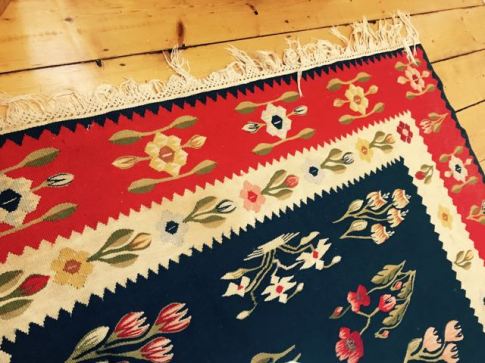 So far so good and it looked very fresh and clean… 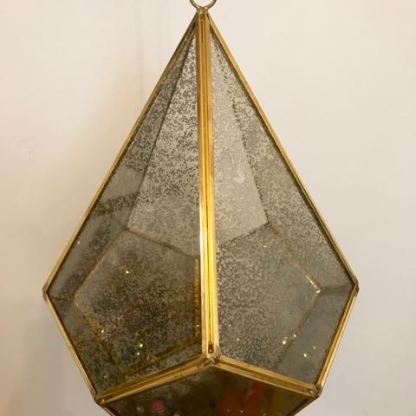 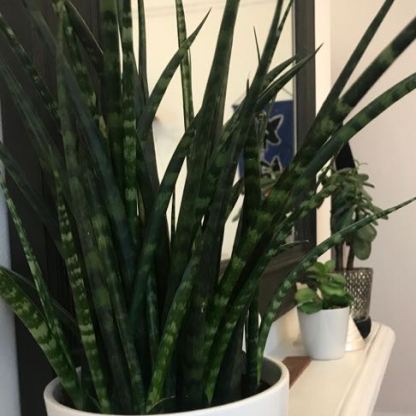 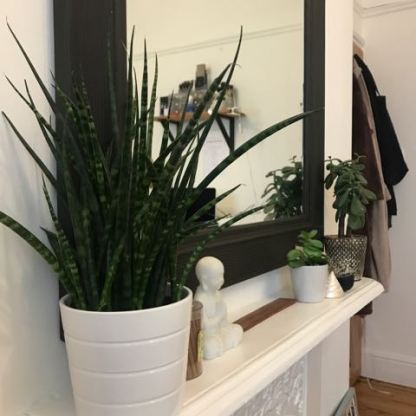 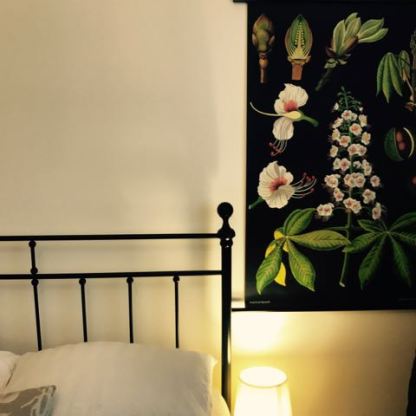 But then a package arrived with her contribution, LED strip lights to hide behind the picture rail.  HMMMMMM….not too sure about that. She can change the colours across the rainbow with a remote control, and it’s like Studio 54 in there now at night.  I actually can’t go in when the blue neon is on as it hurts my eyes, something she probably quite likes – in fact now I think about, this could have been done specifically for that reason. 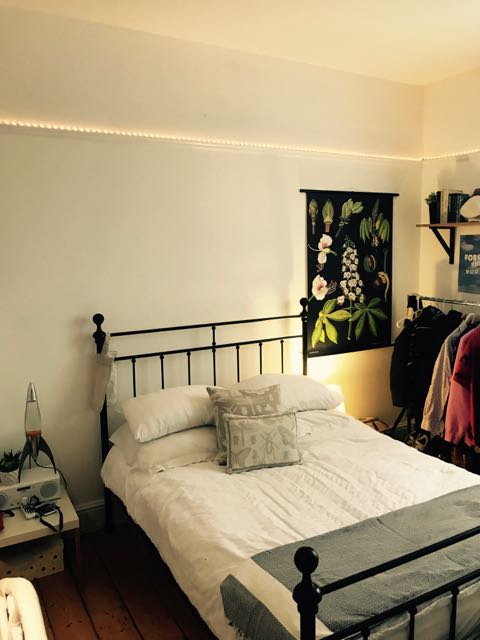 I am saying nothing… as long as she keeps it clean I don’t care!  Here’s a picture she put up of her goals, can’t see ‘keep room tidy’ on it though! 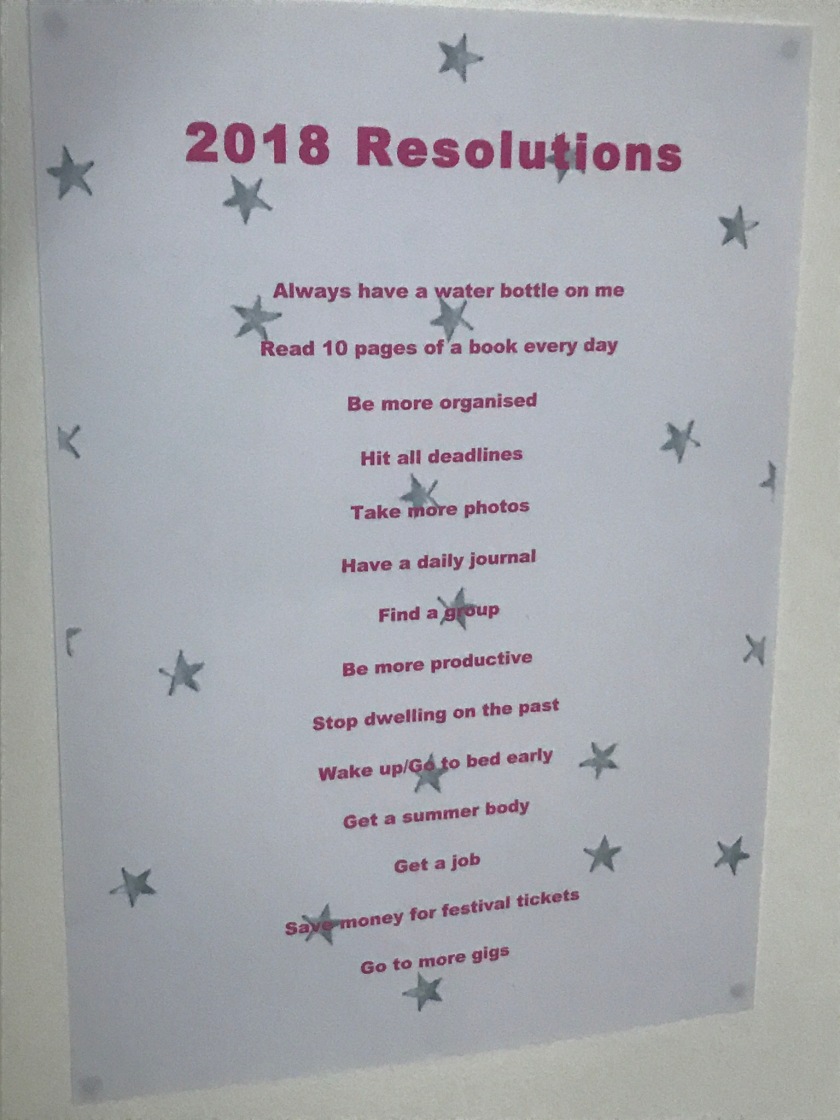 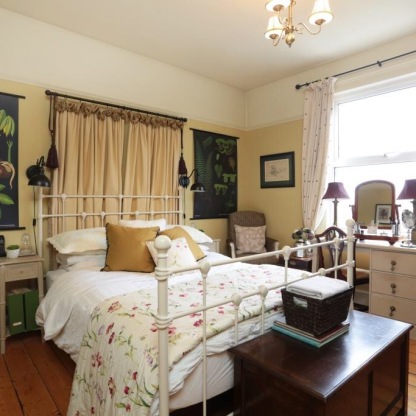 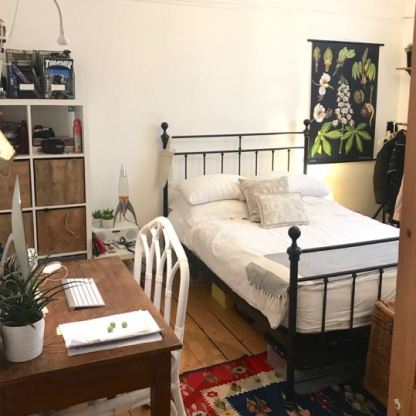 So this room now was to become a spare room.  That brick wallpaper came off at HIGH SPEED… hurrah!  I decided to go grey, taupe and white.  This was mainly due to what I had lying unused around the house to go into the room.

I had an unused pot of dark grey emulsion paint, so that went over the walls between the picture rails and the skirting.  I left the wall behind the bed plain white as it is a small room and I did not want to overwhelm it with dark grey.  The flooring is already dark grey carpet (originally bought to make sure it could not be trashed when this was the daughter’s room, and it has held up brilliantly).  The woodwork got fresh white paint. I had all of the paint for both rooms already, so it was totally cost free.  The curtains are lovely printed linen which I think I got in Ikea a couple of years ago on sale and stored away, (like a squirrel).  We have very tall ceilings in our house, so if I ever find curtains 3 metres long I launch myself onto them at high speed as a general rule.  I had an unused blackout blind as well which I found under the stairs, (my house in a minefield of things hidden away – in fact hidden so well I forget I have them most off the time).  The bed got fresh new white linens. 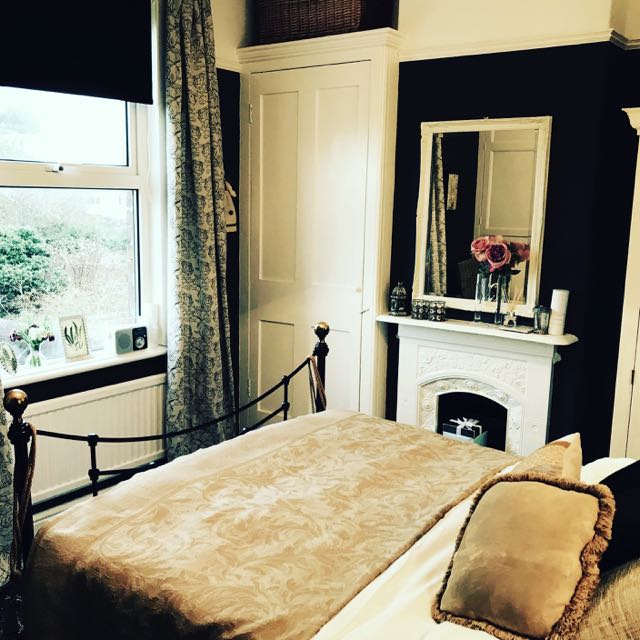 I had two Ikea hacked wall lamps from a previous project, so they were put up either side of the bed as reading lights as there is not much space for bedside tables.  The freestanding wardrobe is painted in Annie Sloane’s Original White and distressed with darker wax. 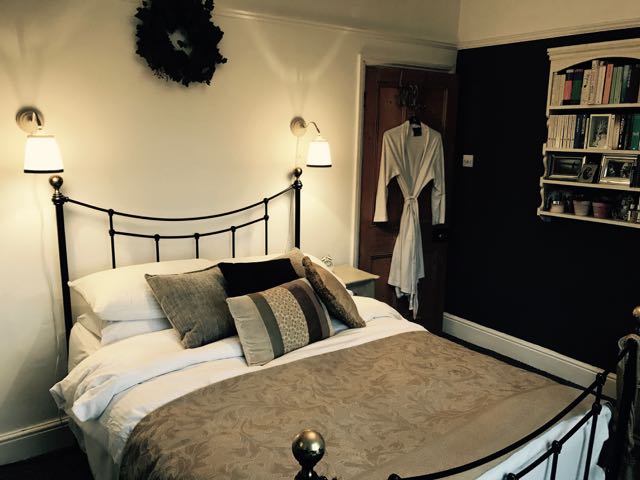 I had an excellent trawl at charity shops with the room colours in mind and got all of the cushion covers for the princely sum of £1 each  A wash and iron, and they look great. The bedspread is yet another piece I found hiding in my linen cupboard.  The wall bookshelves are painted in the same way as the freestanding wardrobe and have books and bath goodies for guests. 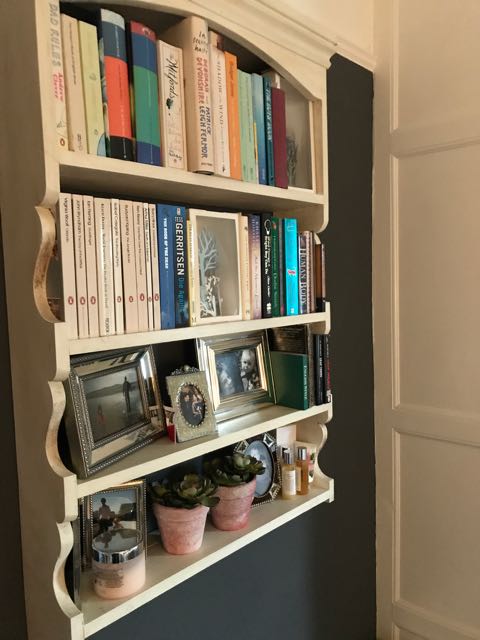 Finally I added an upholstered chair, (that I found a few years ago in a junk shop), which has just the right colours for the room. 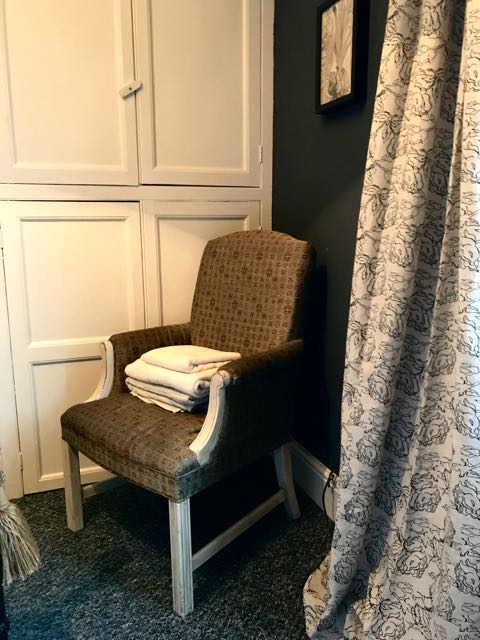 I am really pleased with the room.  Our first guest said he felt like he was in a hotel, so job is done!  It also was done for a song, which is always cheer-inducing around Christmas. 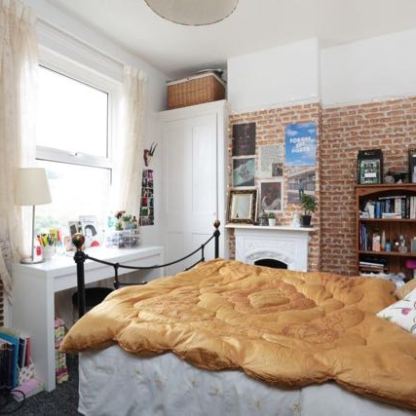 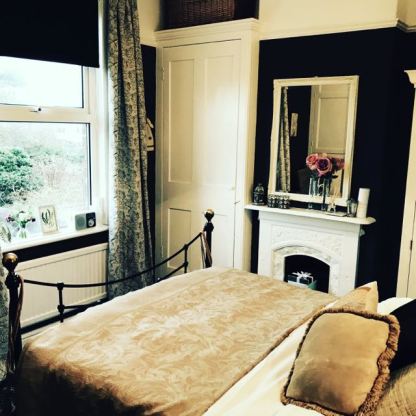 Hope you like the rooms.  I am tempted now to start another one, I forgot how much I like doing them, (but not the ceilings!)……