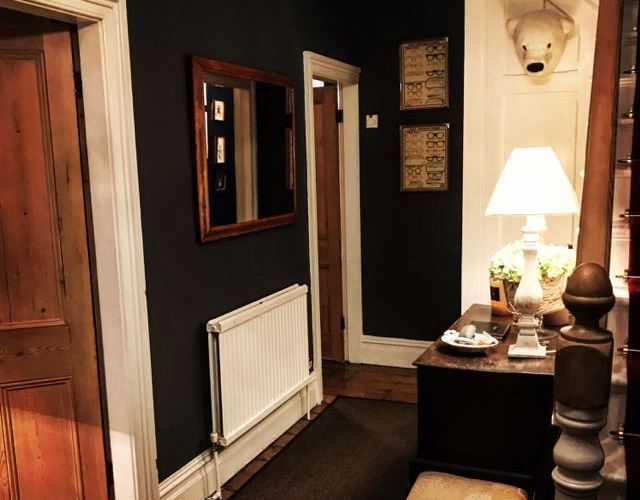 So as we are now staying put in our home, I have been itching to get going on some revamping.  And I have the perfect project to get my teeth into.

Our hallway is quite large, and stretches up through 3 floors, with the staircase splitting off in two directions after the first flight of stairs.  It is not a typical narrow Victorian hallway and stairs, and there is a lot of space and ceiling a minimum of 3 meters tall on the ground and first floors.  When we first came to the house it was painted a sickly aqua green, so I redecorated it in pale taupe and white on the woodwork to neutralise it.  But it is now a long time since it was done, so I have decided to crack on and give it an overhaul.

It has great original floorboards, stained glass windows either side of the original front door and original panelling on the sides of the stairs.  It’s large enough to take a huge period cabinet and a sideboard.  The stairs are original with 2 spindles per step, (takes an age to paint them though).  The stair carpet was inherited with the house, and is a very rich dark red Wilton attached with Victorian stair rods on the first flight.  Then it goes full width up through the rest of the halls and stairs above.  As anyone who knows me is aware, I have a love-hate relationship with this carpet.  It is amazing quality, and looks like new after well over 7 years, and that is since we have been here and it existed pre-us.  But I have 2 cats called George and Mildred, and EVERY hair they drop shows on it, so I have to hoover a lot.  I always wanted to replace it with sisal when it got tired, but the quotes were really high to get it laid well and with multiple angles needed, and it shows no sign of looking shabby yet so I am holding on for the moment.  It has also survived many children, teenage parties and flailing carrying of coffee and tea by the said teens.  So I’m stuck with it for now. 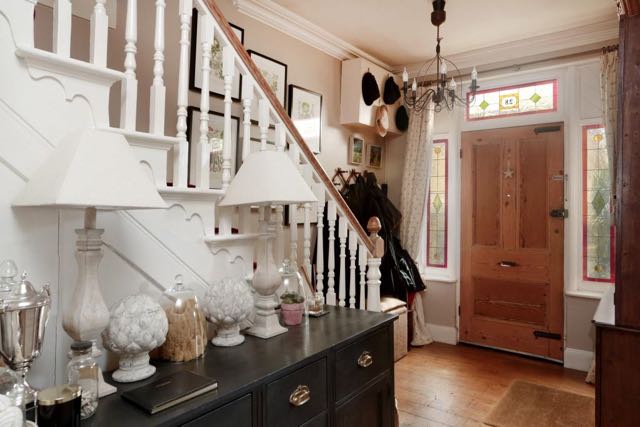 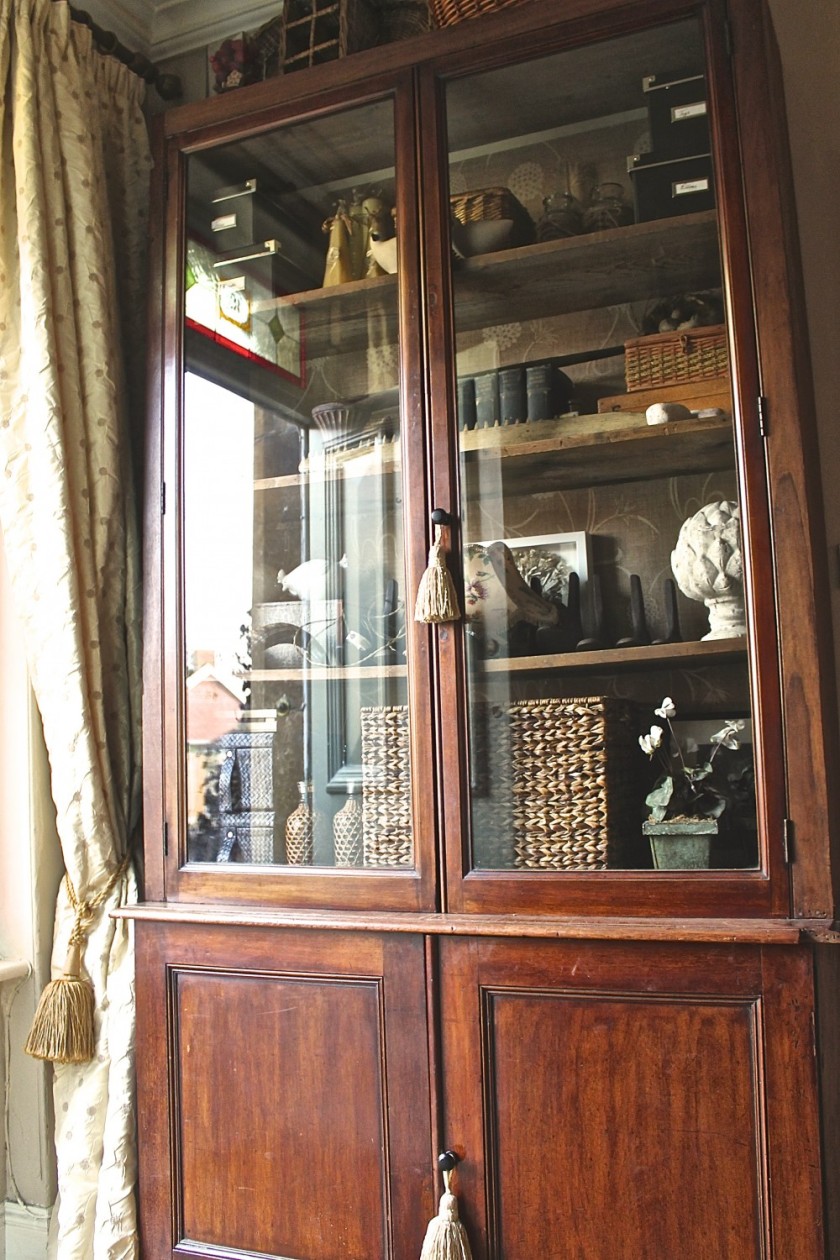 Here the stairs split off, a set of 3 to left to the first floor and another set on the right rising up to the second floor.  This area has a small landing with a balustrade and doors leading off to 3 bedrooms and a bathroom and an ENORMOUS wall which I use as a picture gallery.  There is also an odd cupboard which sits under the stairs up to the second floor, where I stash linens and things I can’t find anywhere else to put.  The ceilings here go up to over 4 meters and it is heart-thudding operation to paint and decorate that high on my ladder.  Here it is as you look up the stairs…

Looking up to the first floor 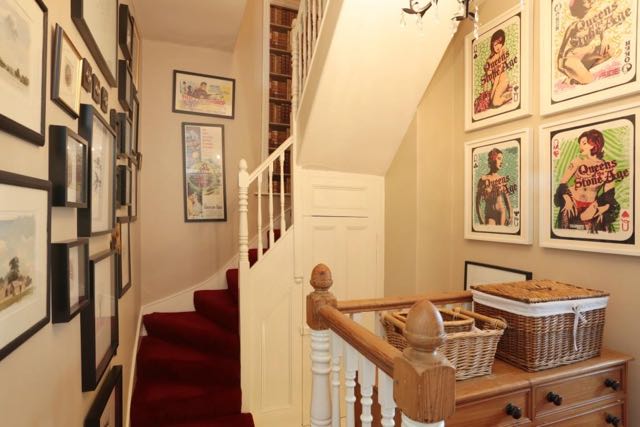 The stairs are shallow and narrow up to this floor and twist up.  Halfway up there is another odd element which is what looks like a boarded up door going nowhere, surround by architrave.  I papered it to look like a bookcase when we first moved in, and it is another strange bit of the house which makes no sense but very characterful.  At the top of the stairs is another landing with a balustraded area where we stash bookcases, and doors off to another 2 bedrooms and a bathroom.  This is looking down, it’s quite nausea inducing….

Well, it’s not going to be pale and tasteful is it?  I have a penchant for dark colours at the moment and my recent spare room makeover uses a beautiful warm dark grey called ‘Asphalt’ that I just love.  So I decided to use this again throughout the centre of the house on the walls, and to keep the woodwork really crisp and white.  The red stair carpet also works really well against it.  Finally, as I have so many pictures, I think they stand out very well against dark walls, so I am planning to re-jiggle all the art and make it look a bit more POW!

But reader, let me tell you.  I need a lot of paint….  I measured up for it, and 12 litres later I was back from the shops.  I also have to get up to the really high points which usually aren’t too scary, but when your ladder is leaning over a drop of 3 floors as well, it gets a bit nerve-racking.

I started on the ground floor, as this is the easiest to paint.  Here is coat 1 going on: 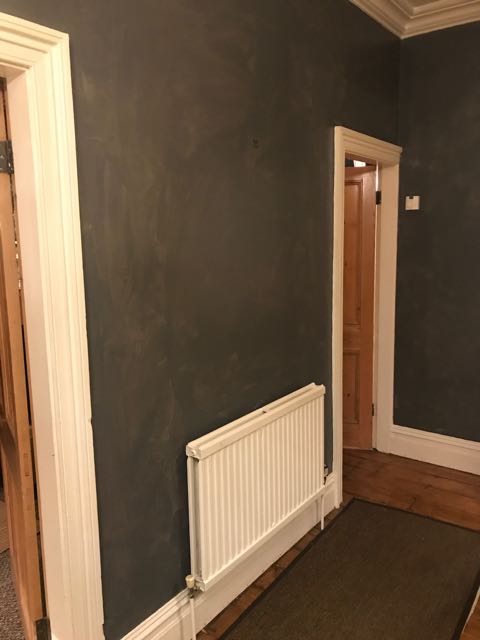 I got up to the second floor, and had to stop for a couple of days to get on with other things, (procrastinating about getting up on that ladder really).  But it looks great on the ground floor so far, and does not suck up the light too much as we still have white elements.  At this point I was wondering whether to really go for it and do the ceilings and cornicing dark grey as well, but I think that is for a rainy day later maybe….

Here it is now, it’s pretty intense but there is enough light in the hall so I like it a lot.  It’s my gothic tendencies re-emerging! 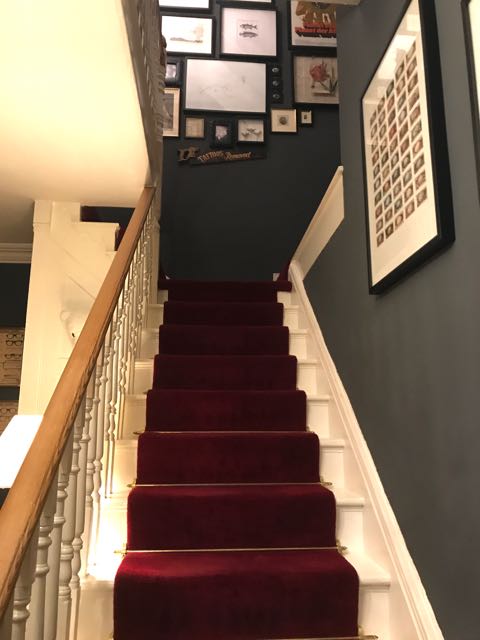 I had a bit of a bargain hunt last weekend and have replaced the old sideboard with a beautiful 18th century coffer chest on a stand that I found at an auction for a song.  It’s a great place to dump keys, post and all the other bits and bobs that people offload when they come in.

Now onto the second floor.  At this point I made my husband come and hold the ladder as I painted, I think I am getting age-related acrophobia.  I then re-jigged and rehung the art and it looks a lot better now against the dark walls.  It’s hard to photograph the various levels, so excuse my photos and the flippin’ chandelier that kept getting in shot! 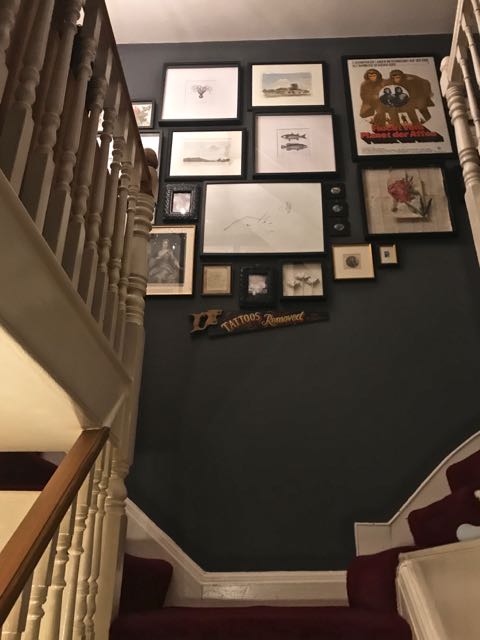 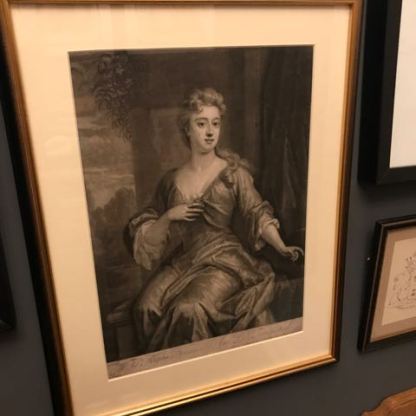 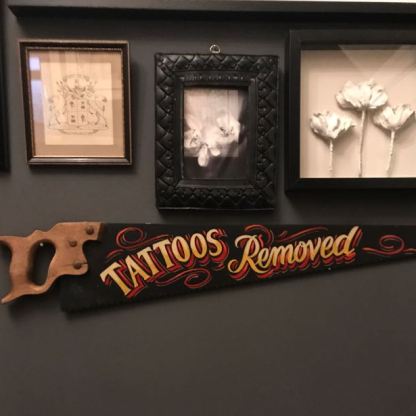 The main gallery wall art is a mishmash was of old family pictures, watercolours, film posters and some contemporary art pieces as well.  In the middle is a Tracey Emin piece my husband received as a seminal birthday present. On the other side is his collection of original prints, they are a bit rock’n”roll and I love the colours.  We couldn’t put them up when the children were small as they are bit full-on and saucy, but now they are teens they appreciate it!

Now looking up to to the third floor.  This is where I am sweating already just thinking about painting that top left corner.  Last time it was decorated I ended up with brushes and rollers gaffer taped to broom handles to reach it as I dangled over the abyss below!

I’ll post a final piece when I have finished it.  I need to order a new light for the top floor as currently there is just a small wall light and I need some serious LED’s or halogen so it does not get too dark up there.  Plus I think it is time to replace the faux books, so hunting from some gorgeous wallpaper to use in that space.

One thought on “Hallway – New Decoration Project Is Underway”