I have a huge obsession with early 20th century literature, especially authors like Evelyn Waugh, Somerset Maugham and Nancy Mitford.  They describe an age of elegance, beautiful houses, artistic endeavours, privilege but also the advancement of social mobility and change.  The books are bitter, funny and sharp. 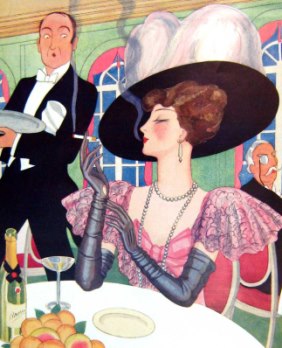 In real life, a group of people emerged at the start of the 1920’s who were dubbed ‘The Bright Young Things’.  Evelyn Waugh pronounced the best definition: ‘There was between the wars a society, cosmopolitan, sympathetic to the arts, well-mannered, above all ornamental even in rather bizarre ways, which for want of a better description the newspapers called “High Bohemia.”

The press could not get enough of these people who tended to be the younger sons and daughters of the aristocracy and their middle-class friends by association, it was the first sign of celebrity being documented in it’s own right.  Lurid stories of wild parties, wealth, promiscuity and convention-flouting were reported and the public lapped them up.

The Bright Young Things included writers, artists, society women and rich club members memorably satirised by Waugh in Vile Bodies (1930).  It was acceptable within the circle to be homosexual, which still as considered illegal in Britain at the time.  In Nancy Mitford’s novels, the most eccentric characters are also allegedly based on real people of the time; who can forget Lord Merlin dying his doves to match his party decorations?  This character was supposedly based on the real-life Lord Berners, an eccentric party-giver whose dogs wore diamond collars as they roamed his grounds.  Or there is a woman known as ‘the Bolter’ as she kept running off from her husbands to marry someone new.

But from this group of Bright Young Things also emerged creative figures in their own right like Oliver Messal, Noel Coward, Stephen Tennant, Cecil Beaton, Rex Whistler and John Betjeman to name but a few.  Although frivolity and frippery was the order of the day, a strong literary development and aesthetic developed and some of England’s most highly regarded artists emerged.  Through literature, documents and photography there is a wealth of information available about these people and their times which I find fascinating.

Some of the interior design from this age as spectacular; money was no object and the aristocracy had started marrying into the US millionaire families bringing great wealth for them to modernise their homes.  You can still see interiors designed by some of these dazzling talents:

Oliver Messel is best known for his lavish set designs for the theatre, ballet and opera, but later he also worked as an interior designer, mainly in the Caribbean for the wealthy and famous.  His interiors are beautiful, and his signature tone of green is now commonly known as Messel Green. 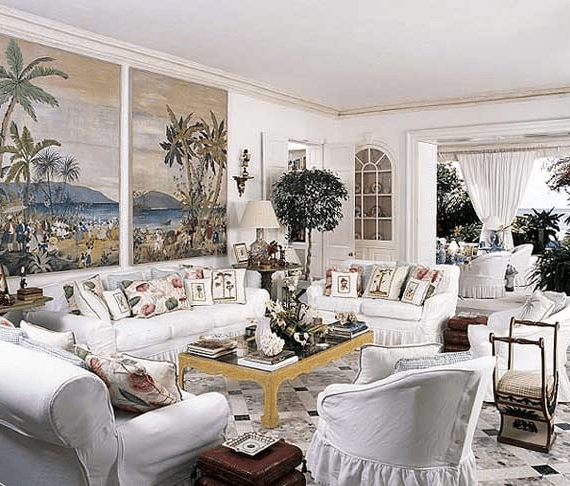 By the 1930’s the Bright Young Things’ popularity fizzled out.  Socially England was changing dramatically, the aristocratic families were breaking up their estates due to huge taxes, and their excesses were seen as distasteful to the press and public.  World War II would draw the final line under this social scene, but it is still such an exciting group of people creatively to draw inspiration from.