Once Upon a time…

I used to help out at an Art Gallery where the positioning and hanging of the art was as important as the pictures themselves.  I think that apart from basic hanging ‘rules’ about eye levels not being too high, hanging pictures is a very personal thing.  However some people get very nervous about putting up art, so here is hopefully a helping hand…

Here is my latest area where I am going to create a gallery wall, a finishing-off part of a dining room makeover.  You can read about the main bulk of work doing the room here.  After finishing the room I was left with a really large wall which has a mirror and two very large formal prints on it placed very formally.  I do like them, but wanted to create more interest and jazz it up a bit.  In fact, I noticed that when I was trying to find photos of that wall, I had hardly any as it was never that inspiring, so that is a bit telling!

I want to create a gallery wall that is much more contemporary, and uses a variety of artwork and interesting pieces.  I find I always lean towards hanging art very symmetrically and I suppose that is my comfort zone, but this time I am intentionally going to offset the pieces and push the boundaries for myself.

Can I apologise in advance for glare on the photos, the wall faces a large french window and the reflections were murder in my pictures! 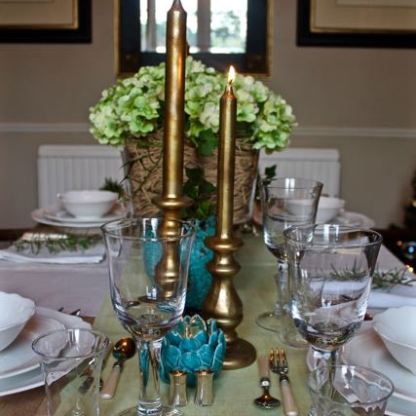 So you can sort of see the wall in the back of the pictures, and it is definitely time to make it more interesting.  It is nearly 4 metres wide and has 1.7 metres clear vertically in the dado to picture rail space  There is a radiator below the dado rail bang in the middle, and I might have get a cover made for it as it does stick our like a sore thumb, but that can be a later project.  I know some people paint their radiators in the same colour and paint as the wall behind, so that could be an option…

ROLL OVER BANKSY… AND APOLOGIES TO DAVE…

I have been preparing for a gallery wall, and wanted to make some of my own artwork for it as well as using existing pieces.

I had started to hunt around for original prints, and found some images I really liked, but the artists’ works are REALLY expensive, and then they would need framing and so on.  So I thought I would pay homage instead and get creative for next to nothing.

I found this very cheeky artwork by Dave Buonaguidi.  He has worked in advertising for over 30 years, founding St. Luke’s, the world’s first Co-operative ad agency and most recently Karmarama in 2000. In 2003 he created the iconic MAKE TEA NOT WAR poster for the anti-war march. It now is part of the collection at the V&A and hangs in the Trento museum of modern art. He loves to make work that creates a reaction.  And this one really is a bit full on, but I like the text over a map. 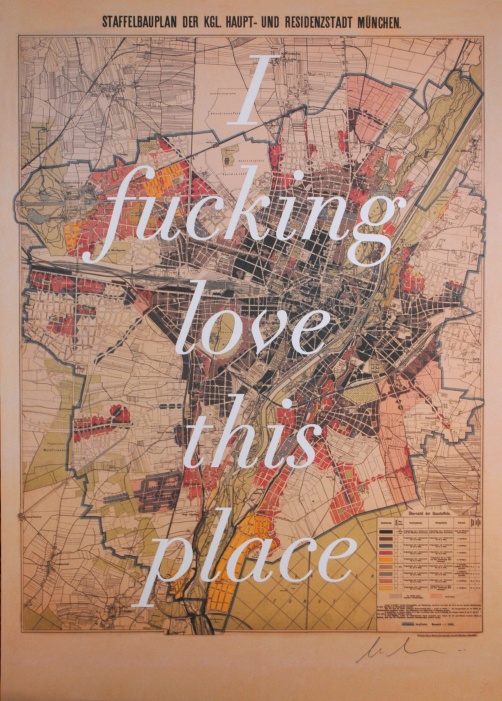 Obviously I needed to tone down the wording on my homage to this, I can just imagine the looks of horror from people visiting with kids if I copied the above verbatim!  So this is how I made my own version by changing the working to ‘I bloody love this place’, far less brutal text than the original but still a bit cheeky and a bit ‘English’.  I also have older teenage daughters who would not be offended than younger ones would be, so I think I can get away with it…. maybe… just!?

HOW TO MAKE YOUR STREET ART

I had a vintage framed map of Milan lying around in storage.  It has fond memories for me as I lived there for a few months many years ago, and had a blast whilst there.  So I thought it was a personal piece that I could adapt.  This was going to be the base of the artwork.  I carefully opened it up, and cleaned up the glass on both sides. I measured how much space I had free on the part of the print which would be visible when re-framed.

Download the free font ‘Marigold’ from fontspace.com, and then you can make any text you want and it is a lovely curly handwritten font.  If you don’t want the bother of making your own document I enclose a pdf you can use but it does have my wording on it, be warned!

I then printed out my wording, in my case on A3 paper as my print is quite big.  Print with black ink.

END_OF_DOCUMENT_TOKEN_TO_BE_REPLACED

dabbling in the html word

I have in the past built CMS websites for people, schools and businesses but purely as a hobby/sideline and via word of mouth, and last week I was commissioned to come up with a design for a very simple and clean website by a private Art Dealer that I encountered in Bristol.

His speciality is Modern & Contemporary Art, with an emphasis on street art.  He has some very impressive and works by contemporary artists that he collects and sells; Damien Hirst, Banksy, Antony Micallef, Peter Blake, Chris Ofili, Laure Prouvost and many more.  It is an eclectic mixture of original artwork, prints, sculptures and ceramics.  It was a really nice project to get my teeth into as he has some amazing artwork that I could study for both the website and my art workshops with children.